Back to Knowledge Library

The past few decades have seen dramatic improvements in the region in access to food, as well as reduction in stunting rates and in premature death and disability caused by communicable, maternal, neonatal and nutritional diseases. However, the gains in the fight against hunger and malnutrition have reversed in the wake of conflicts and violence that have spread in many parts of the region in the last decade.

Today, nearly 55 million people in the Arab States (13.2 per cent of the population) are hungry, and the situation is particularly worrying in countries affected by conflicts and violence: Iraq, Libya, Somalia, Sudan, Syria and Yemen. Displacements and forced migration are widespread in the region, especially among the growing youth population segment.

Many countries carry a double burden of malnutrition, including overweight and obesity as well as undernutrition. A high or very high prevalence of stunting in children under the age of five persists in nearly half of the Arab States, while anaemia is a severe public health issue in certain countries. The trends of overweight and obesity continue to worsen for children and adults.

Beyond these numbers, the report explores food systems in the Arab States and the policies that support them. It also explores how the latter have contributed to poor nutritional outcomes by failing to make safe and diversified healthy diets available to all. 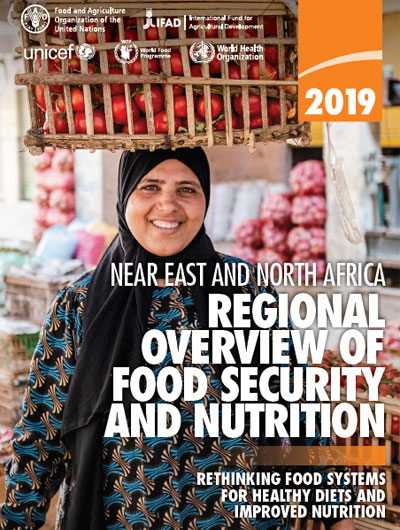 FAO, IFAD, UNICEF, WFP and WHO

FAO, IFAD, UNICEF, WFP and WHO. 2020. Regional Overview of Food Security and Nutrition in the Near East and North Africa 2019 – Rethinking food systems for healthy diets and improved nutrition.